When I ride my bicycle, I pass many Amish and Mennonite family homes and farms. Like many, I have seen Amish people on television portrayed as serious people dressed in traditional clothing and who keep to themselves. Often, they are asked by "outsiders" to pose for pictures in their horse and buggy. They are stared at because they look different than mainstream America. But who are they really, what are some of the common elements they share, and how do they differ from those who are not Amish or Mennonites? What are some of the most common misconceptions?

The Amish are among the fastest-growing populations in the world, with an average of 6.8 children per family. (1) They prohibit the use of contraception. There are over 249,000 Amish and Mennonites throughout North America. The largest settlements live in Ohio, Pennsylvania and Indiana respectively.

1. What is the difference between Amish and Mennonites?

"The difference between the two groups is how the beliefs are practiced and lived. The overall doctrine followed by each is similar.
The Mennonites tend to be more accepting of technology and the outside world than are the Amish. Furthermore, the Mennonites accept higher education and modern technology. They tend to see these influences as ways that can be used to strengthen their religious beliefs.

The Amish, on the other hand, tend to feel that these influences of the outside world only interfere with the purity of their faith. They generally forbid higher education, dress in "plain" clothes, refrain from the use of electricity and ride in horse-drawn buggies. Despite these differences, it should be noted that there are groups of Amish who accept worldly influences such as higher education and the use of automobiles. Likewise, there are groups, of Mennonites that don't accept such influences and still ride in horse-drawn buggies and forbid higher education.

Perhaps, the best way to understand the Anabaptist heritage in Lancaster County is not to distinguish between the Amish and the Mennonites. Rather, it is more helpful to differentiate between the "Old Order" and the "Modern."

Old Order Amish and Old Order Mennonites are those who base their lifestyle decision-making choices from their faith fellowship and tradition. These are the Amish and Mennonites who dress "plain," forbid higher education, ride in horse and buggies, and choose occupations connected to the farm and to the home.

On the other hand, Modern Amish and Modern Mennonites are those more acculturated to modern society. They accept the influences of the worldly society even if those influence may conflict with what their faith fellowship believes."

(This section is taken directly in its entirety from Welcome-To-Lancaster-County.com)

2. Why don't they use modern conveniences like electricity?
Amish people believe that linking with electrical wires as a connection with the world that is counter to their simple life. Easy access to such things as television, radio and the Internet are seen as temptations that may erode family and religious values. However, they do use gas to power refrigerators and stoves.

3. Do they go to doctors and hospitals?

Yes. There are no restrictions for use of modern medicine or hospitals. They do not carry insurance because of the need to maintain their independence and self-reliance. However, there is a community of funds to cover such expenses.

4. Are they exempt from going to war?

No. All males between the ages of 18 and 25 who reside in USA have to register for Selective Service (the Draft). However, most Amish and Mennonites practice non-resistance and do not participate in war. If the draft were ever reinstated, the Amish would most likely be exempt from serving due to conscientious objector status. The government created a Conscientious Objectors policy that allow Amish men and others the option to work in an alternative service program away from home rather than join the military. This includes working in hospitals, doing community service, or participating in agricultural programs for a period of two years in lieu of military service. (Wikipedia)

5. Why don't they have to pay Social Security Tax?

First, Amish and Mennonites do pay income, real estate, federal, state and sales taxes. However, Congress approved an exemption for self-employed people to pay Social Security Taxes. The reasoning is that the church will look after its own elderly members. Therefore, many Old Order Amish refuse Social Security benefits and believe they should not pay into a system they don't use.

6. Do they home school their children?

Amish church groups seek to maintain a degree of separation from the non-Amish world. There is generally a heavy emphasis on church and family relationships. They typically operate their own one-room schools and discontinue formal education at grade eight

7. Do they really shun people who violate the rules?

Yes. If someone violates the rules of the order and does not repent, it is believed that there must be consequences for that behavior. Shunning is social isolation in an extreme form. At times, this can even extend to other family members. The intention is to bring the violators back into the fellowship.

Amish always part their hair down the middle and keep it up in a bun beneath their prayer caps. Amish never cut their hair short either.

The Amish are most closely related to Protestant Christians in their religious beliefs.

The Anabaptist numbers more than 1.6 million living in 80 countries. At least 60 percent are African, Asian, or Latin American.

Amish are also called Amish Mennonite. The church originated in the late 17th century among followers of Jakob Ammann.

Amish do not have zippers or buttons on their clothing, instead they use hook-and-eyes, straight pins, snaps, or even Velcro to fasten their clothing.

The Amish will refer to a non-Amish person as an Englisher, even if the person is from a non-English speaking country.
There are nearly 1,800 Amish communities across the United States.
The largest Amish community is in Holmes County, Ohio and the second largest is in Lancaster County, Pennsylvania.

Beachy Amish and Amish Mennonites are allowed to drive cars and have electricity.
Amish clothing are all handmade, but this does not mean that they do not use sewing machines. However, these sewing machines are either generator, gas, or foot powered.

Amish women prefer to grow vegetables, arrange dried flowers, bake Amish goods, or can fresh fruit to sell in the markets to make extra money for her family.

Amish are trilingual. They speak Pennsylvania Dutch (or Low German) at home, Hochdeutsch (or High German) during church services, and English when speaking with outsiders. Pennsylvania Dutch is a spoken language only, so they are required to write in English.

The rules and regulations that each Amish must abide by are regulated by the Ordnung (pronounced Ott-ning). This includes regulating the dress code, the use of electricity and cars, education levels, and other daily issues. Ordnung rules vary depending on the Amish community.

Prayer caps are always worn by Amish from the time they wake up to the time they go to bed as a sign of their belief in and submission to God.
Amish do not have pockets on their clothes because it could be used to hold small items in secret that might lead to feelings of pride or individuality. The Amish prefer to live humbly without pride or boastfulness because it can hurt the community as a whole.

Amish are allowed to ride in cars driven by someone else, but they are not allowed to own or drive their own cars.

The Amish date in secret and not even the families know about the relationship until a church leader announces their upcoming marriage to the community during Sunday services. The wedding will usually occur just a few days to a few weeks after the announcement, usually between October and December.

Amish have their worship services every other Sunday rather than every week. These off days are spent relaxing or visiting with friends and family because no work is allowed.

There are no church buildings in an Amish community because services are held in different homes on a rotating basis. The Amish must clean, remove furniture, cook, and even paint the walls if necessary in preparation for the church service being held in her home once or twice a year.

You are welcome to reprint or distribute any of the material found in this newsletter. The only requirement is that you include the author's name, a copyright statement (copyright Dr. Maura Cullen) and the web site address www.TheDiversitySpeaker.com

Email ThisBlogThis!Share to TwitterShare to FacebookShare to Pinterest
Home
Subscribe to: Posts (Atom)
Market and Sell YOUR Books: Tips for Indie Authors

Nominated: Cash In On Diversity 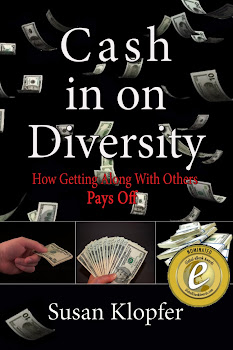 Diversity Equals Innovation, Says DiversityInc Ceo “As a trustee, I've seen how superior diversity management under the leadership of Rutgers President Richard McCormick has driven Rutgers from $1.3 billion to $1.9 billion in total budget—as the state of New Jersey decreased its funding of higher education to a lower level than 1993.” http://diversityinc.com/article/7900/Diversity-Equals-Innovation-Says-DiversityInc-CEO/

Diversity Central Cultural Diversity at Work began as a hard copy journal in October, 1988. It was the first nationally recognized publication on workforce diversity and cultural differences in the United States. Today, it continues as an online article database regularly updated by new articles published on DiversityCentral.com. http://www.diversitycentral.com/learning/cultural_diversity_at_work/about.html

Diversity at the University of Oregon “Diversity, not casual liberal tolerance.” http://diversity.uoregon.edu/main.htm

Diversity at the University of California http://www.universityofcalifornia.edu/diversity/

On Diversity and Multiculturalism http://www.cimpa.org/diversity.htm